Pothos vs Philodendron: Can you tell the difference between these two very similar-looking plant species? If the answer is no, you’re not alone!

Many beginner plant parents can’t tell the difference between Pothos and Philodendron. In fact I was once one of them!

If you want to know whether you’re tending to a Pothos or a Philodendron, stay right here for the full lowdown. I’ve written this guide to help you learn to spot the subtle characteristics of each plant and tell the difference the next time you’re plant shopping. Pinky promise 😉

Pothos vs Philodendron: The Similarities

Here’s a list of good reasons why you might not yet know the difference between Philodendron and Pothos. It took me a while, trust me!

Both of these plants belong to the Araceae family – or aroid plant family, as it’s sometimes known. These species are characterized by the presence of a spadix, which grows at the center. Flowers bloom on this stem-like structure, and sometimes a leafy piece of greenery also encloses and protects the blossoms.

Many lilies, for example, belong to the Araceae or Arum family. Species include calla lilies, and wild plants like Arum Maculatum, a woodland flower endemic to Europe.

Philodendron plants and Pothos plants also have similar growth habits. They grow as a vine would, either trailing from a height or climbing up a fixture such as a garden trellis. Both plants look great when you hang them (read my post on how to hang plants without drilling).

Both Pothos and Philodendron have curled-up leaves when they first grow. These will then open out into a mature leaf when they’re good and ready. It’s hard not to confuse them two when they both grow leaves in the same way!

Because both of these plants are climbing, vining kinds, they will both develop aerial roots. These are used by the plant to secure itself as it climbs up a trellis or a set of canes.

Both Philodendron and Pothos are pretty easy to care for and grow. Both prefer indirect light, and like a similar sort of soil, watering frequency, and temperature range. Both plants can grow in water too, making them some of the best houseplants for beginners.

Pothos vs Philodendron: The Differences

The Epipremnum genus is the one most Pothos plants belong to. So though Philodendron and Pothos belong to the same family, they belong to different genuses (or genera if you’re a scientist) within that family.

Though they’re both heart-shaped, Philodendron leaves are typically wider than Pothos leaves. The leaf of the Philodendron also tends to have a more marked curve than the Pothos. So if your plant has wide leaves with a dramatic curve where the leaf meets the stem, it’s likely to be a Philodendron.

The foliage of the Pothos is normally thicker than that found on a Philodendron. These denser leaves also have a more lustrous finish – almost as if they’ve been polished with a layer of wax. So if your plant has smooth, glistening leaves that are thicker but also narrower, it may well be a Pothos.

There can be color differences too, though these do vary between species. A Pothos is likelier to have variegated leaves (decorated with lime green speckles) while those on a Philodendron may be darker and more uniform in tone.

Variations in the Petiole

A petiole – in case you’re not familiar with the term – is the part of a plant that connects each leaf to the stem. These are quite different on Pothos and Philodendron. So it can be easy to tell the difference by taking a quick look at where the stem and leaf meet.

The Pothos’ petiole is straight, and the Philodendron’s petiole is indented. If your plant’s petiole resembles a small stick of celery at all, then you probably have a Pothos.

A Philodendron petiole is curved, so it arches away from the plant’s stem as it leads towards each leaf. If your plant has curving petioles that aren’t indented, then it’s likely to be a Philodendron rather than a Pothos.

Though both Philodendron and Pothos have curled-up new leaves before they unfurl, the way they grow does vary.

Each new Philodendron leaf is initially sheathed in a cataphyll. This is a protective layer that dries up and falls off when the leaf is mature. At first, Philodendron cataphylls can be a peachy pink in color, but they will gradually turn greener as they develop.

A fresh Pothos leaf looks just as the matured version does. It might be smaller and less rich in color, but essentially it looks the same as a fully grown leaf. There is no protective cataphyll, or any other covering, over a newly-minted piece of Pothos foliage.

If new growth starts out as green and doesn’t have any kind of sheath, then you have a Pothos. Where there’s a protective sheath that starts out as pinkish in tone, then this will be a Philodendron plant. This cataphyll will later turn brown and fall off.

Both of these plants grow aerial roots to help them climb, but they do look quite different. Philodendron aerial roots are narrow, and there will be at least a couple of roots protruding from each leaf node. Some say they’re messier – and that’s probably an accurate summary!

Pothos’ aerial roots are thicker than those found on a Philodendron. A great way to tell the difference when you can’t compare is to count the roots present at each node. If there is only one root right by where the petiole meets the stem, then you’re looking at a Pothos plant.

While both species prefer dappled light, Philodendrons can often cope with too little light more easily than Pothos. Of the two, Pothos will generally deal better with a drought.

The average Pothos will thrive in a slightly higher temperature than a Philodendron, though the difference is minimal. In fact the two plants can be successfully grown together in most cases.

How do you tell a Pothos from a Philodendron at first glance?

A Pothos has thicker, waxier foliage, while Philodendron leaves are wider and more obviously heart-shaped. The petiole, where the leaf meets the stem, is indented and straight on a Pothos. A more curved version is found on a Philodendron.

While both of these vining plants grow aerial roots, there will be several thin Philodendron roots by each leaf node. The aerial roots on a Pothos are thicker, and there is always only one growing by each node.

Which is better – Philodendron or Pothos?

A Pothos can require less care than a Philodendron. It may also grow much more quickly. If you want more uniformity in terms of color, go for a Philodendron. Both Pothos and Philodendron  plants may also come in a choice of variegated colors and patterns, however.

Philodendrons often don’t need quite as much light as more variegated Pothos plants. A good level of sunlight is needed by a plant with patterned leaves, so these can develop fully. Pothos plants also tend to prefer higher temperatures, which sunshine can also cause.

Is a Monstera a Pothos or a Philodendron?

No, they are two different plants. Although they look similar, Monsteras and split-leaf Philodendrons are different species, even though they are of the same scientific class, order, and family.The Philodendron is a genus and includes Monstera Deliciosa. Pothos is part of the Epipremnum genus.

Can you plant Pothos and Philodendron together?

Their care requirements are very similar, so it is okay to plant Philodendron and Pothos together. Remember that any variegated plant may need more light though. Bright but dappled light works best, and don’t water either of these plants until the top layer of soil feels dry.

Final thoughts on Pothos vs Philodendron

Though these two vining plants look similar and can even be grown together, there are some key differences. It’s true that both belong to the same wider family, but each is in a different genus (or group).

Variegated Pothos or Philodendron plants tend to crave more sunlight than ones with more solidly colored leaves. There are many species of each to pick from.

At a glance, a Pothos will have thicker, more waxy leaves, plus a straight yet indented petiole leading to the stem. Philodendron leaves are more clearly heart-shaped, and are wider. The petiole on a Philodendron is curved, and has no indentation.

Whichever you own, these pretty trailing and climbing vines look graceful in any home. They’re not too tricky to care for either. So why not add another to your existing collection? Both make ideal houseplants for beginners!

Check out more of our plant care guides below:

Are you interested in getting a houseplant, but don't know where to start? Here's my curated list of the best houseplants for beginners! Pretty pink houseplants are setting the trend this year, adding a pop of color to our green world. Here are 15 pretty pink plants that… 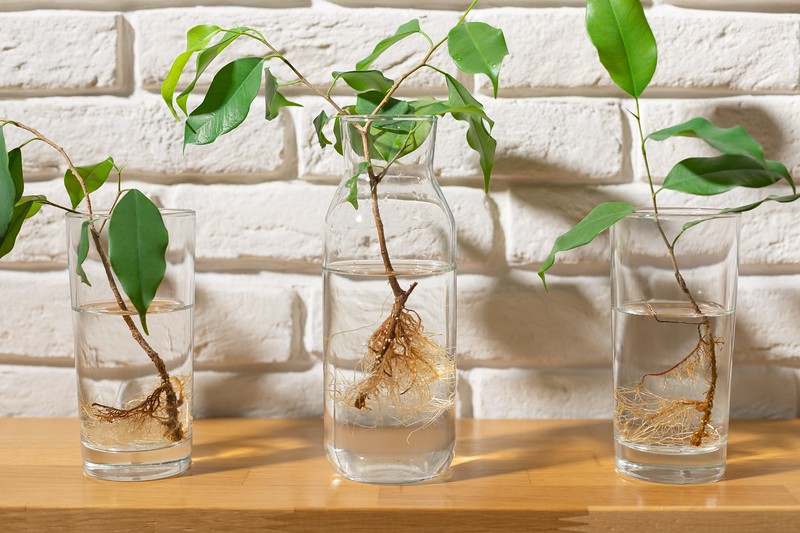 If you’ve been wondering about indoor plants that grow in water, the list of possible options might well surprise you. There are plenty of hydrophilic… 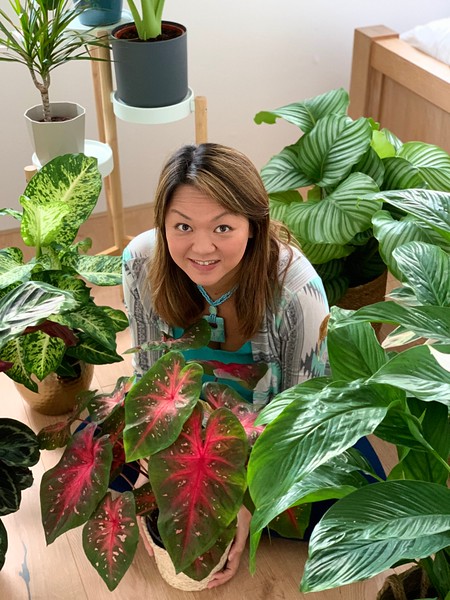 Hi I’m Nellie, and I’m a plant addict! Originally from Singapore, I’m a global citizen currently living in Mexico with my Spanish husband and our 6-year-old daughter.

A travel writer by profession, I have traveled to over 140 countries across seven continents. My work has been published on Lonely Planet, Rough Guides, and BBC Travel. Read about my adventures on Wild Junket.

I created this space to share my world beyond travel. Here I write about my other interests, including plants, home decor, and DIY. Join me on my journey of self-discovery.