There are so many beautiful Calathea varieties out there, which one do you choose to add to your plant collection? I’m here to help!

The Calathea genus is one of my favorite plant species, thanks to the attractive, variegated foliage. The foliage can range in color from cream or pale green to an irresistible deep, dramatic pink. In many cases, the leaves of the plants are patterned. The Calathea Orbifolia for example have pretty silver stripes that look like they’ve been painted on by a skilled watercolor artist.

In total, there are around 60 types of Calathea. Whichever Calathea plant types you’re interested in, this list of Calathea varieties will help you select the ones you’d love to nurture!

Read on to find out more about this glorious genus. Starting with a general guide to Calathea care.

Let’s get something straight right from the outset. The Calathea plant has a reputation as being one of the more demanding houseplant types to care for. Is this account of the genus accurate?

Partly, yes. They’re not the sort of plant you can completely neglect and get away with it. But once you’ve got into the right care routine it’s not difficult at all to nurture an exquisite specimen.

Take it from me – caring for Calathea isn’t rocket science. These are the basics they need to thrive. A lot of it is simply about recreating that jungle environment the plants originally come from!

Keep your Calathea in a pot with drainage holes. At the start, you’ll also need a container with enough room for all the roots, plus a little growing room. Place this in a saucer so you can drain away excess water.

The best soil for your Calathea is a potting mix offering good drainage. This is because the plants can be prone to root rot, which can spell disaster!

Calathea does need sunlight. This helps the foliage to develop the appealing patterns and colors it’s known for. Direct sunlight, however, can scorch the leaves.

A spot that offers indirect sunlight is best. To be honest, I’ve found it’s easiest just to experiment with different windows – and distances from them – until the plant seems happiest. An east-facing window is often ideal, if you have one.

See also  How to Hang Plants Without Drilling

Otherwise, try one with a northerly aspect. Think of how the plant would sit in dappled sunlight on the jungle floor. That’s the kind of conditions you need to try and recreate at home.

This could be where Calathea’s reputation for pickiness comes from. The plant definitely prefers distilled or filtered water, or clean rainwater, to tap water.

Add water once the top layer of soil feels dry to the touch. Make sure you drain away any excess as soon as it fills the saucer. This can help prevent root rot.

Humidity for the Calathea

Calathea species tend to originate in the tropical jungle, so it prefers a hot, steamy environment. Misting can help, though this may do more to ward off bugs than in terms of adding moisture!

The Easiest Calathea to Care for

Some Calathea species are easier to care for than others. Those I’ve found the simplest to look after include Calathea Orbifolia, Calathea Ornata aka Pinstripe Calathea, Calathea Concinna or Calathea Freddie, and Calathea Lancifolia aka the Rattlesnake plant.

The Hardest Calathea to care for

Calathea White Fusion is often said to be one of the most tricky to care for. Though some of us love a challenge, right? It’s because getting the white patterns to look good requires very precise levels of humidity and sunlight.

Here are 20 of the most awesome Calathea varieties, with names and pictures. I’ve begun this list with three of the easiest Calathea to care for, and ended it with the tricky Calathea White Fusion.

Also known as Calthea Freddie, Calathea Concinna is one of the least demanding species. Despite this, those markings are pretty spectacular! The leaves are also more pointed than usual, and slightly wavy.

Just check out those pretty and perfectly shaped markings. I’d say Calathea Concinna or Freddie is one of the best Calathea to start off with too. Why not try one out to see for yourself?

Calathea Latifolia looks different. It grows up to two meters high and resembles a banana plant. The glorious purple flowers are a real treat to see when this one flowers.

Often called the Rattlesnake plant, Calathea Lancifolia has wavy leaves with snake-like stripes in deep and lime green. Beneath, the foliage is burgundy. This one’s pretty easy to look after too.

Calathea Ornata or the Pinstripe Calathea is also one of the simplest to grow. It has dark green leaves with even, creamy-colored stripes and a light pink mid-section. Underneath the leaves are deep purple.

This is one of my personal favorites! The complete Calathea Orbifolia care guide on this site is based on my own experience.

What I really love are the subtle stripes on the large leaves. They look just like they’ve been added by a talented watercolor artist.

If your style is more subtle, then you’ll love Calathea Network or Calathea Musaica! Instead of having bold stripes, it’s characterized by a series of more haphazard, much smaller lines. The leaves are lime and emerald in color.

Medallion Calathea or Calathea Roseopicta Medallion is more dramatic. It has big, broad foliage patterned with deep green, pale green and mid green. The markings feather at the edges, looking like they’re been drawn on by a skilled artist.

If you adore pink, you’ll love Calathea Roseopicta Rosey! The pattern is similar to Calathea Dottie, but the central section of each leaf is a rose-toned pink. At night, you’ll also see the purple undersides when the foliage folds up.

Calathea Makoyana is also called the Peacock plant. This is because of the markings, which resemble those on the beautiful bird’s feathers. The leaves tend to be very shiny and have visible indentations, and are lime and dark green in color.

Sometimes it’s all about the feel of a plant – and that’s where Furry Feather or Calathea Rufibarba comes in. The name refers to the soft, strokable, velvety leaves. Though they’re not really patterned, the leaves are mid green with an attractive undulating shape.

The Zebra plant or Calathea Zebrina almost appears too perfect to be real! The striping is very defined. In lime green, it really stands out against the much darker green background.

Say what? This Calathea’s unusual name comes from a leading Polish botanist. The alternative name of Calathea Jungle Velvet may be easier to pronounce.

Underneath, the foliage is dark purple in color. On top, they are a rich, deep green with stripes that feather out from the central vein. Each leaf can grow to around 12 inches long, so they’re pretty big!

Calathea Crocata is a flowering kind of plant. The blooms are rich yellow to orange in color, and the foliage is wavy and deep green. This one’s sometimes known as the Eternal Flame.

Like Calathea Crocata, Calathea Marantifolia has tropical flowers that are yellow to orange in color. Again the plant looks a little like a banana tree.

Calathea Bachemiana is distinctive because it has longer leaves than other Calatheas. These are spear-shaped. In color they are pale green, with mid green stripes feathering out from the stem.

Goeppertia or Calathea Loeseneri is also called the Brazilian Star Calathea. This is for the star-shaped, white to light pink blooms. A central, ombre-like stripe is a paler green than the mid green leaves, with thin lines feathering out from this.

This one is also known as the Thai Beauty. It’s prized for its lime green, feathered striping. The foliage is purple beneath, and also folds up during hours of darkness.

Calathea Micans are smaller than most Calathea species. It has wavy leaves with light and mid green stripes that seem to blend into one another. The gently frilled edges add to this plant’s appeal!

The Calathea with the reputation of being hardest to grow is the White Fusion variety. But boy (or girl) is it worth it – just look at that gorgeous pale patterning! The paler sections range from white to cream, contrasting very photogenically against darker shades of green. It actually resembles the pretty pink plant, Stromanthe Triostar.

If you want to try growing Calathea White Fusion, pay particular attention to giving it dappled, indirect sunlight. It will also thrive in a humid environment. A bathroom with an east-facing, opaque window could be just what it needs.

If I had to pick just three Calatheas that really stand out, they would be Calathea Orbifolia, Calathea Freddie or Concinna and Calathea White Fusion.

Why these three? Well, as already mentioned, I have a weakness for a seemingly hand painted  Calathea Orbifolia!

Calathea Freddie wins a spot because it’s dramatic in appearance, yet easy to grow. As for Calathea White Fusion – many see this one as a challenge. If you’ve had success with other Calatheas, though, maybe it’s time to give it a go?

There are around 60 Calathea species to pick from, and this guide has listed 20 of the very best. If you’ve never grown a Calathea before – what are you waiting for?

As long as you pay some attention to humidity and watering, anyone can nurture a Calathea plant. The only question is – which one will you begin with or add to your growing collection?

Check out more of our plant care guides below: Are you interested in getting a houseplant, but don't know where to start? Here's my curated list of the best houseplants for beginners!

Pretty pink houseplants are setting the trend this year, adding a pop of color to our green world. Here are 15 pretty pink plants that… 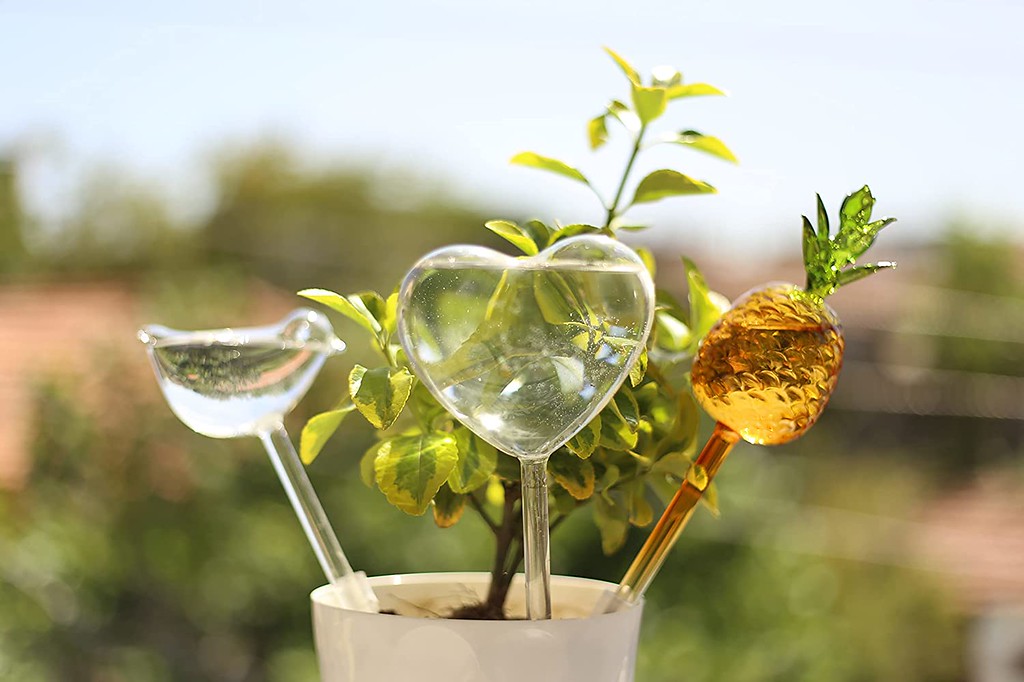 Do self water globes work? Here are my tips on how to use watering globes effectively to keep your plants alive while you're on vacation.

Hi I’m Nellie, and I’m a plant addict! Originally from Singapore, I’m a global citizen currently living in Mexico with my Spanish husband and our 6-year-old daughter.

A travel writer by profession, I have traveled to over 140 countries across seven continents. My work has been published on Lonely Planet, Rough Guides, and BBC Travel. Read about my adventures on Wild Junket.

I created this space to share my world beyond travel. Here I write about my other interests, including plants, home decor, and DIY. Join me on my journey of self-discovery.